Mylea™
Technology
Sustainability
Inquiry
News
About
FAQ
← Back to News

Feel The Experience to Walk The Future Together with Mimic Mylea™️

After almost a year, through rapid prototyping, rigorous testing, and collaboration processes. Mylea and Hijack are proud to present to the audience a future sandal that you can see firsthand through the Brightspot exhibition. The exhibition was held at Senayan Park from January 26, 2022, to January 30, 2022.

Mimic Mylea™️ inspired by Homo Sapiens, an abundant and widespread primate species. With extensive and complex brains enabling the development of advanced tools, homo sapiens can create a civilization. When technology tools have become ubiquitous and more advanced comes more enormous responsibilities for us toward our surroundings. More specifically, our nature and environment for the next generations.

To be able to reach the future that we strive for, there is no other way than to start creating the future itself. Thus, we introduce you to Mimic Mylea™️. Hijack Sandals' first sandal was crafted with Mylea™️ mycelium leather engineered by Mycotech Lab.

Mimic Mylea™️ is enhanced with environmentally friendly Mylea™️ leather for the primary upper material. Hi-Flex insole for comfort and long-lasting cushioning with arch support. Available in two colors - Mylea & Blach and two outsoles: Hi-Tact & VIBRAM®️ Ripple outsole for extra grip and comfort. Exclusively released in Indonesia and Japan, Mimic Mylea is only available in limited quantities on hijacksandals.com and hijacksandals.world for global market placed at 2,490,000 IDR (250$) for Mimic Mylea and 2,990,000 IDR (300$) for Mimic Mylea Blach.

For more story about Mimic Mylea™️ you can visit us by clicking here: 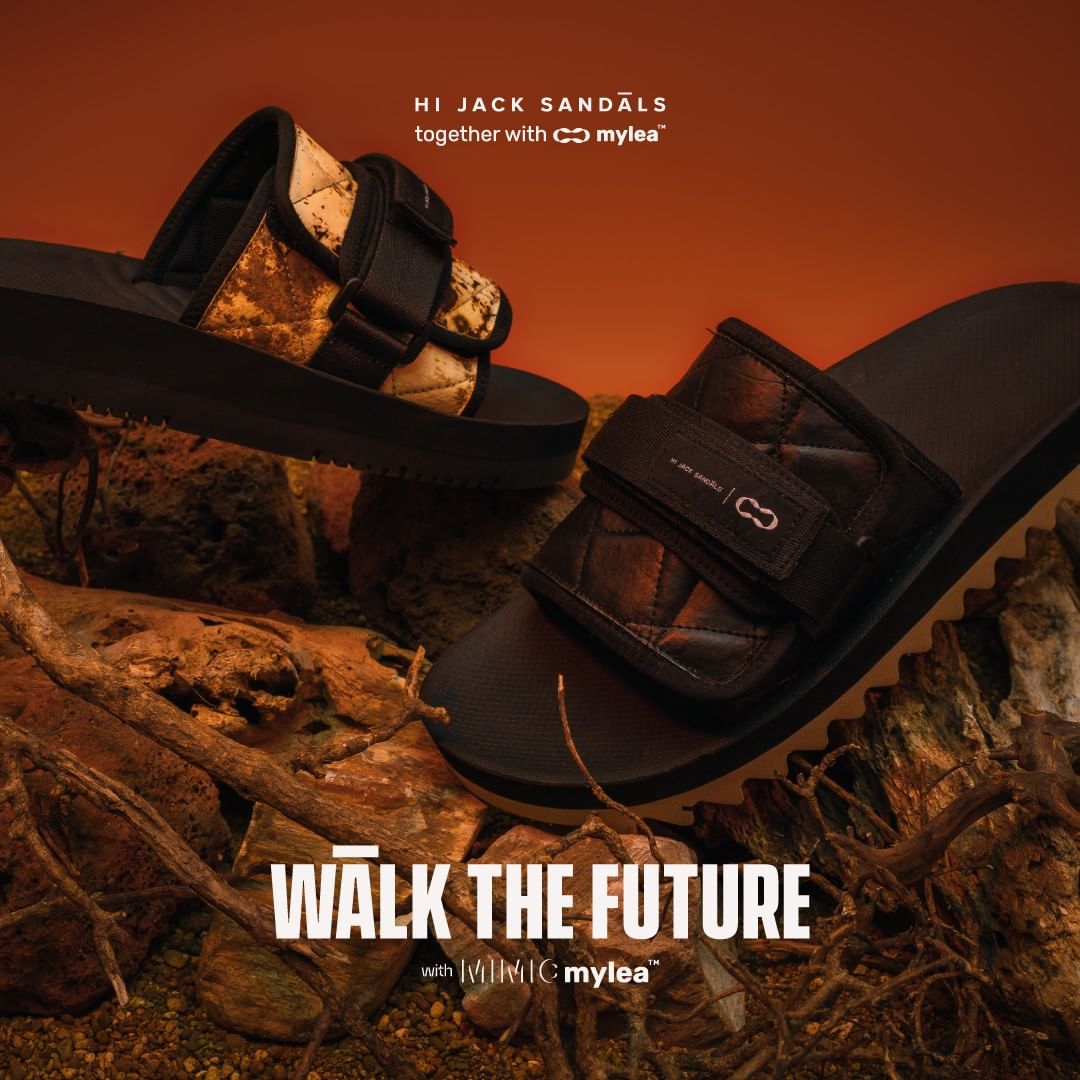 Hi Jack Sandals was first established in 2010. The idea of creating a sandal brand started when many people were hyped about the fashion trend of the leather-dress shoe. Instead, we rather did the opposite thing by not following the ordinary, began to design and create our own paw-covering leather that was known as sandals.

Grown Beneath Our Feet
Media Coverage
20 May 2022
English

Mycelium has caught the attention of researchers for a range of sometimes surprising reasons. British biologist Merlin Sheldrake, for example, recently authored the best-selling by Jessica Hemmings ©2022 Surface Design Association, Inc. All rights reserved. Reproduction without permission is strictly prohibited. SPRING 2022 / 25 fashion. Mycelium’s speed of growth and relative ease of cultivation are often cited as positive environmental benefits of its production. Launched in 2015, Mycotech Lab, or MYCL, is an Indonesian bio-based material startup.

“ I always knew that the environment is having a problem, and with all this buzz about the climate crisis, I knew that we humans must act. And I know that being aware of the environment is actually cool. I've seen people who are living very eco-friendly lifestyles. But, it looks like such a hassle and expensive, though” Have these kinds of thoughts slither past your mind when considering living more sustainably? It may be because of the novelty , but sustainable and environmentally friendly living is not yet the norm in our society. Click here to read more!